We provide a wide range of business services, anything a company may need from its foundation to the successful operation and development.

We offer our vast business experience and great connections with all relevant institutions in our country.

We run your business books by using the latest IT solutions and complete electronic communication because we respect your time and energy.

We help you save on tax payments and get tax incentives. Members of our team have good contacts in banks and state institutions.

We shall help you register your new company or entrepreneurship in the most efficient manner.

Quality of service  is the final result of our day-to-day work to which we are dedicated. We are always ready to do research in order to solve your problem or fulfil your requirements. We will always have time for this and we consider it a very important condition for our satisfied customer.

LET’S DO BUSINESS TOGETHER

How has accounting developed

A bit of history

From the time of ancient Babylonians until the 15th century, business changes were recorded by describing in the reminders, the so-called memories. There were no expenditures and income and property value was determined by the inventory.
In 1458, Dubrovnik citizen Benko Kotruljić wrote a book “About Trade and a Perfect Trader” – known for its chapter XIII, where he described the principles of dual accounting and the methods of recording transactions which are used even today. In this not very known piece in these regions, a complete bookkeeping concept has been drawn up, one which is a cornerstone for the future accounting development.
. 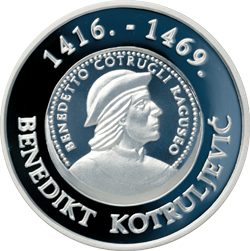 Namely, the Kotruljić family were merchants who settled in Dubrovnik around 1350. At that time, Dubrovnik was a great trading centre and an independent republic, and Benko himself was born in 1416. His education started in Dubrovnik and continued in Italy where he studied philosophy and law in Naples. He returned to Dubrovnik after his father’s death in 1436 to take over the family business in a shop with wool, which was traditionally bought in Bosnia and Serbia, and sold in Italy and Spain. Finally, in 1453, he moved to Naples with his family, where he governed a mint until his death in 1469.
This man, Benko Kotruljić, was most likely a Serb by origin, and it was him who had the honour to create a dual bookkeeping system which was and remains a unique and unprecedented concept of bookkeeping.
Accounting itself is defined as a scientific method of systematic recording, reporting, planning, monitoring, and analysis of economic transactions generated by the business of a company. By its nature, accounting is a part of the management function of a company with the most significant integrals: Bookkeeping with Balance, Cost Accounting, Accounting Planning with Analysis and Accounting Supervision.

Bookkeeping promptness is our first and foremost priority. All submitted documentation is processed immediately, so all reports are realistic and accurate.

Informing the client is our next task. Which legal innovations are important for each client in particular, what your company’s result is in every period, and the amount of VAT must not be a surprise.

Guiding through legal procedures when establishing a new firm, as well as advising a client on entering into a new business process are other things that we consider to be part of our business. We will provide each client with a comprehensive professional support so they are able to obtain the necessary prerequisites for reaching the business goal as soon as possible.

Our entire service is available electronically. You can scan and submit all the documentation for bookkeeping through e-mail.

Vigilant monitoring of legal changes in a business environment is necessary for precise and reliable work. We cooperate actively with one of the leading consulting companies in our country, Tax Office Tatić. We are regular subscribers to their magazine Taxes and Accounting www.porezionline.rs and our accountants visit their seminars on all current topics.

Discretion in work includes a guarantee that the client’s business secrets will really remain secret, and the client can rely on us and fully trust us.

Our accounting software www.tim-erp.com is based on cloud technology and allows interactive work with you. You have the possibility to access the base from any point or device and see the reports that interest you. You can also use the same software for your business needs to the full extent with our on-line tracking.

Let’s do business together